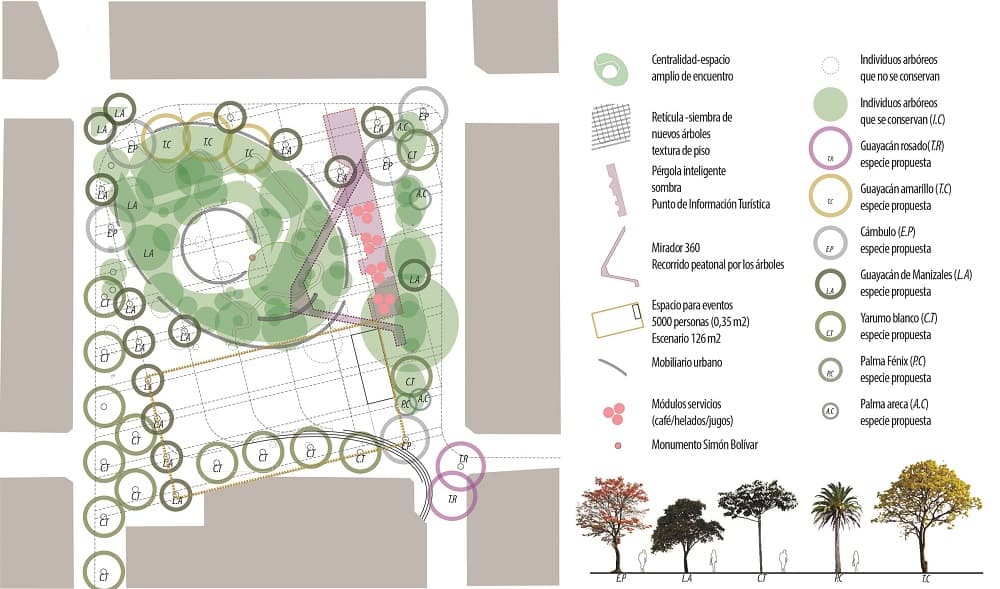 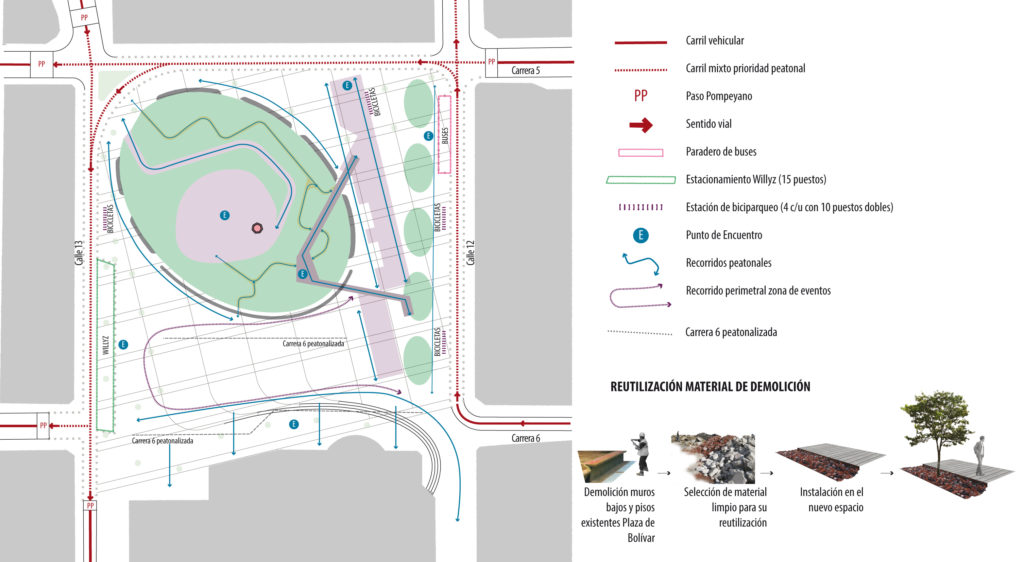 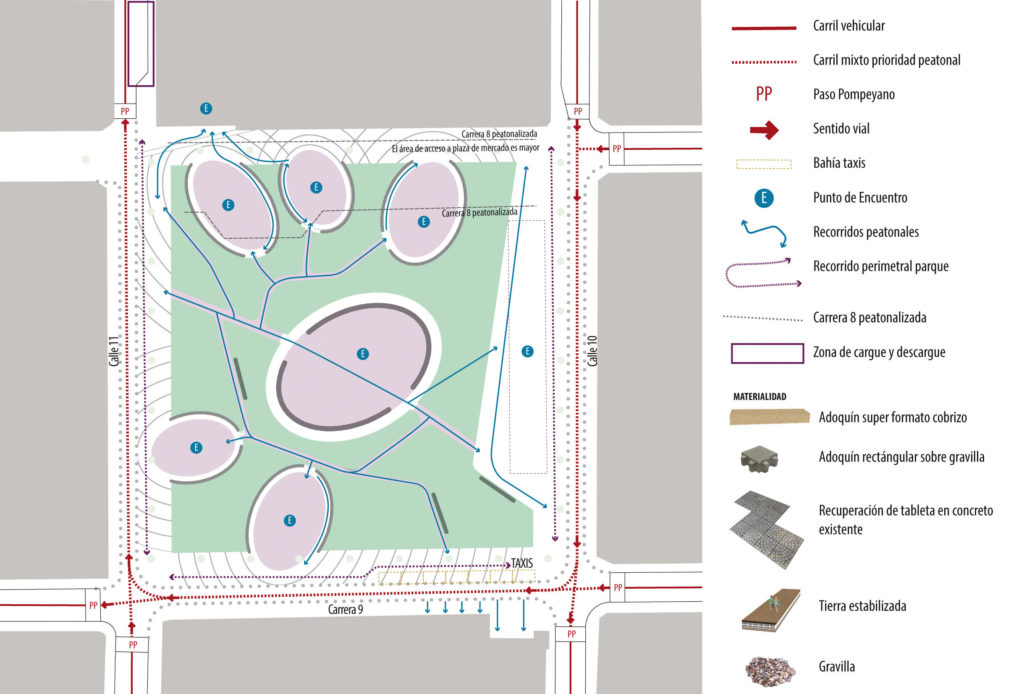 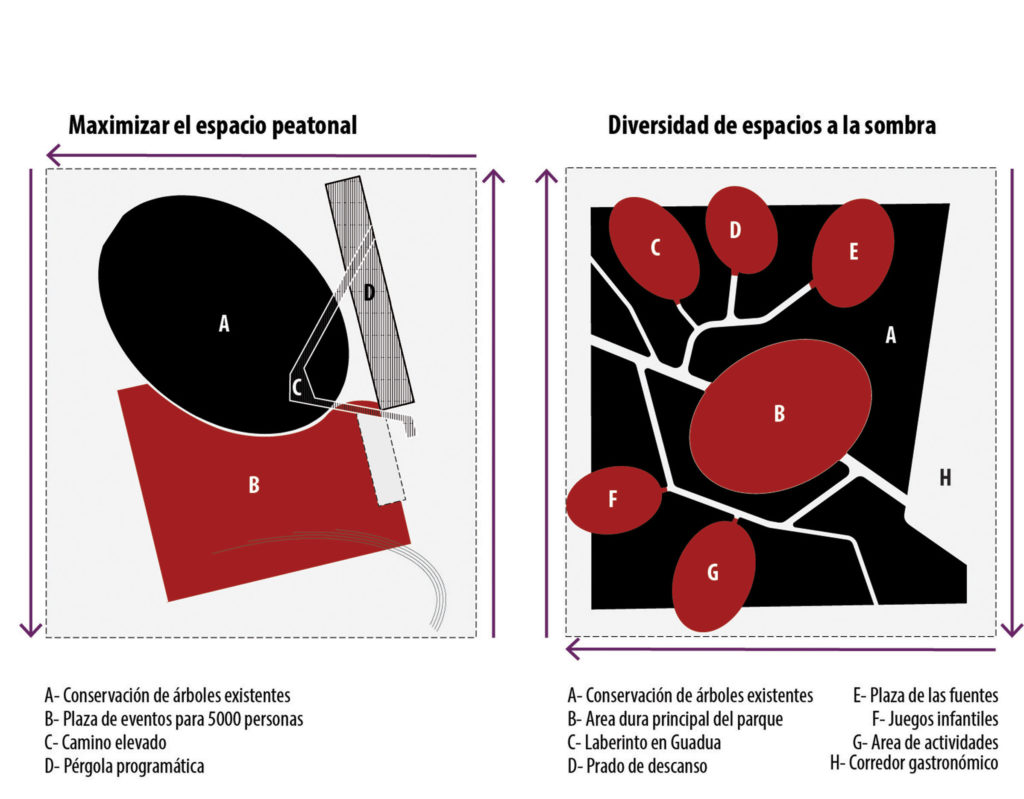 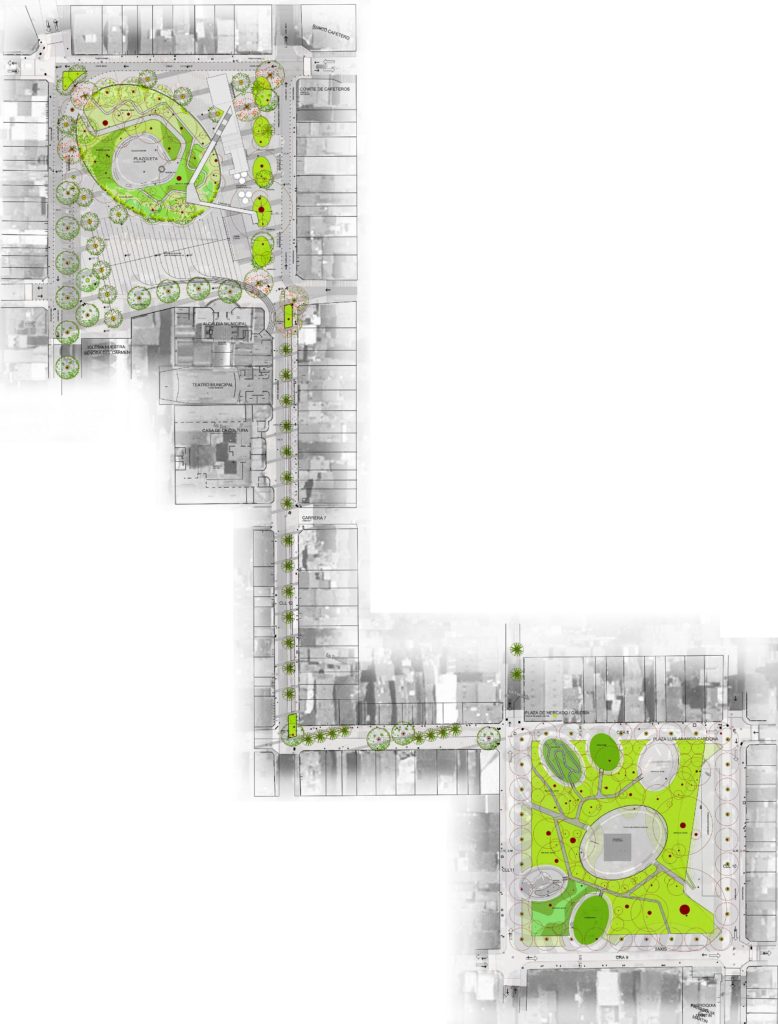 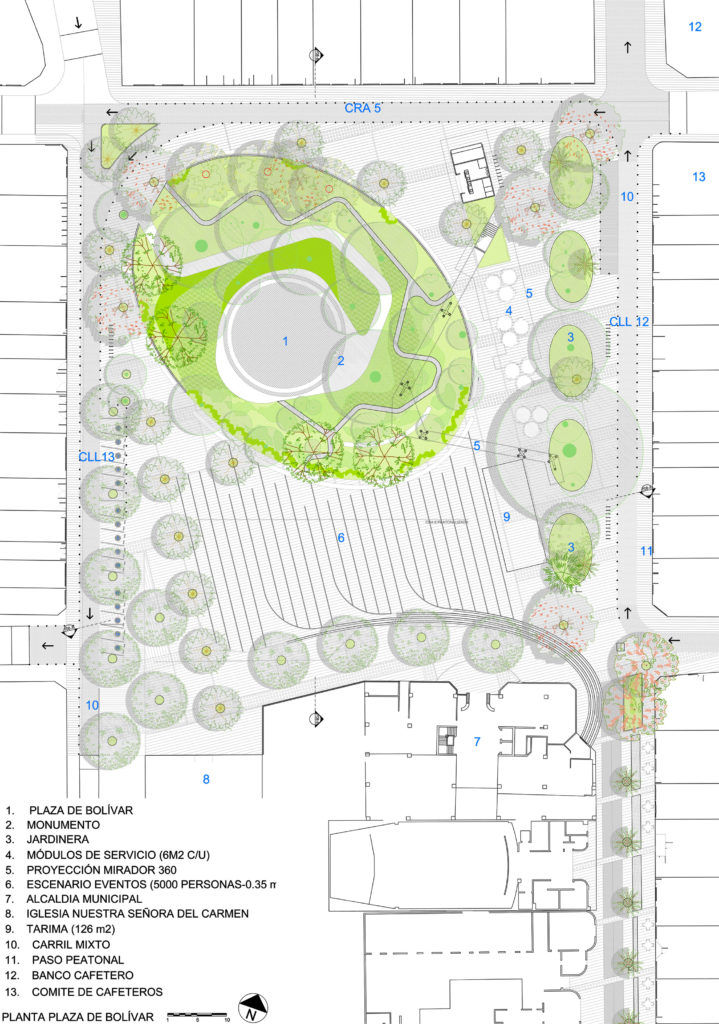 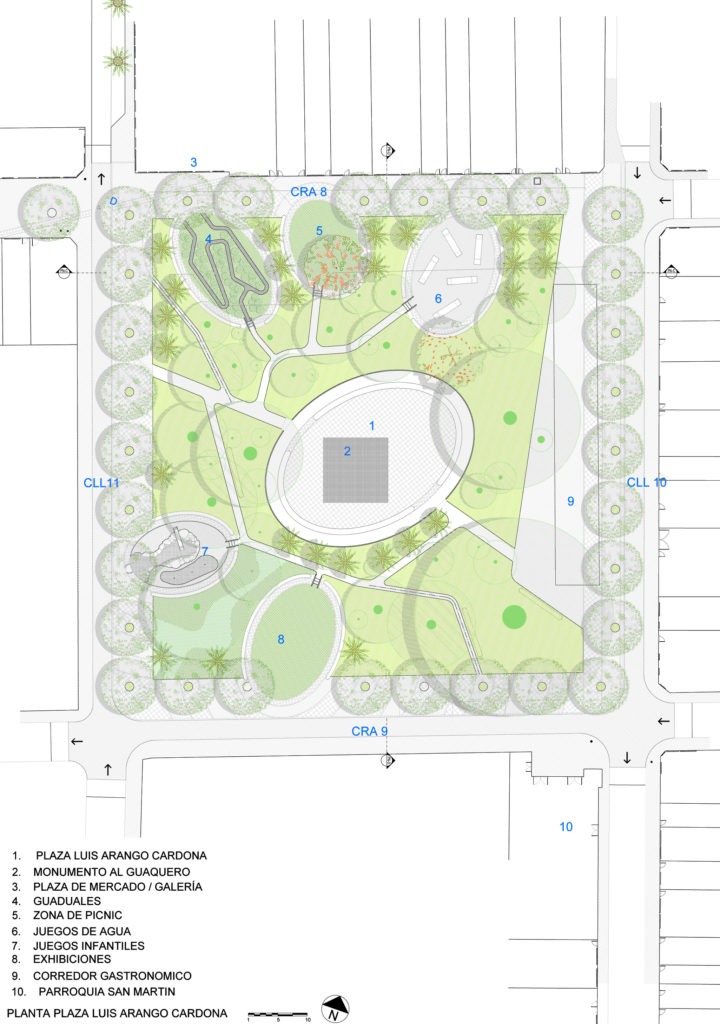 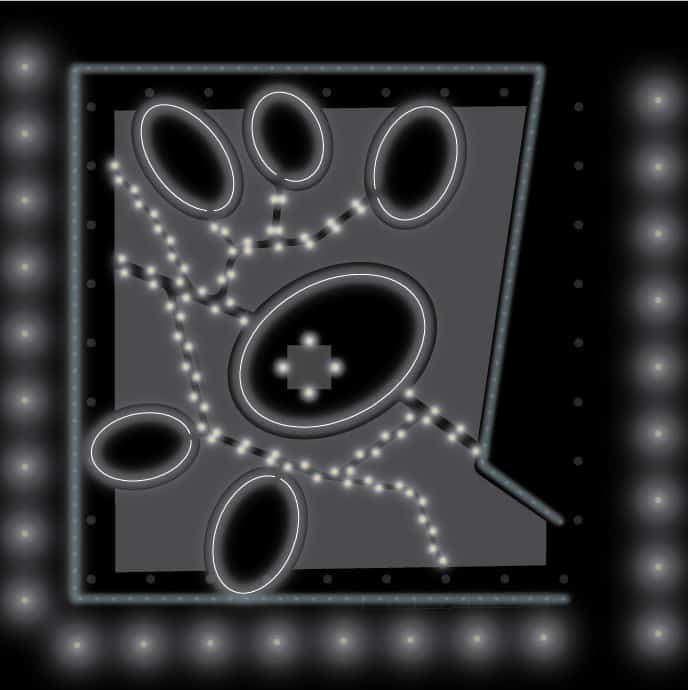 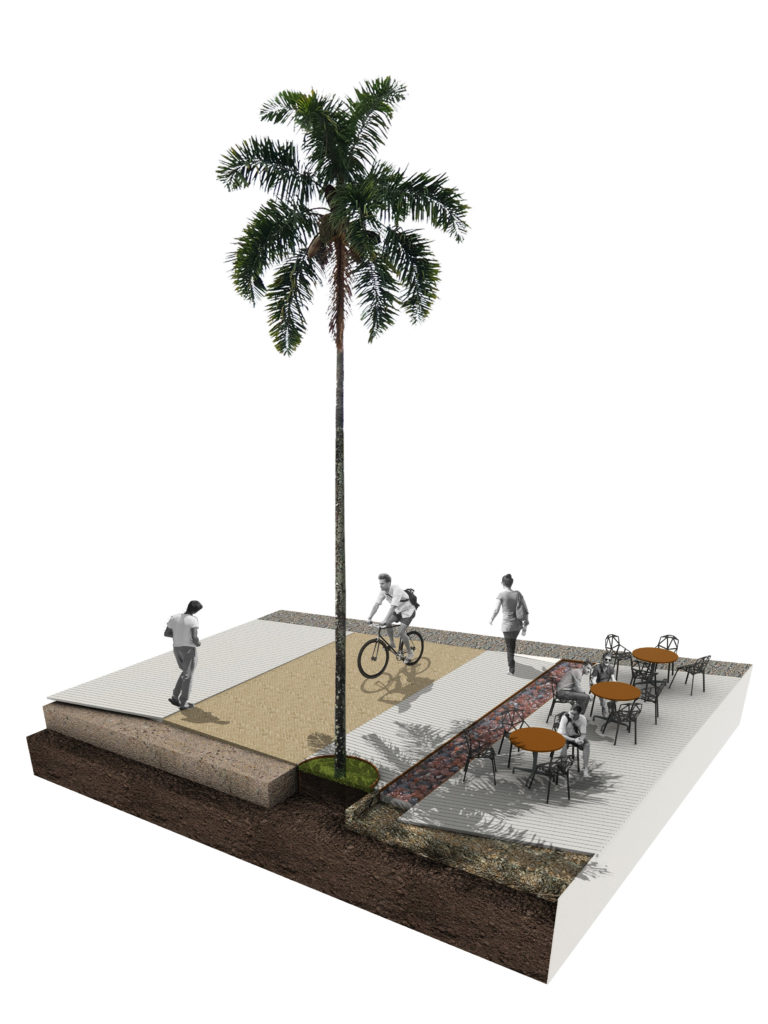 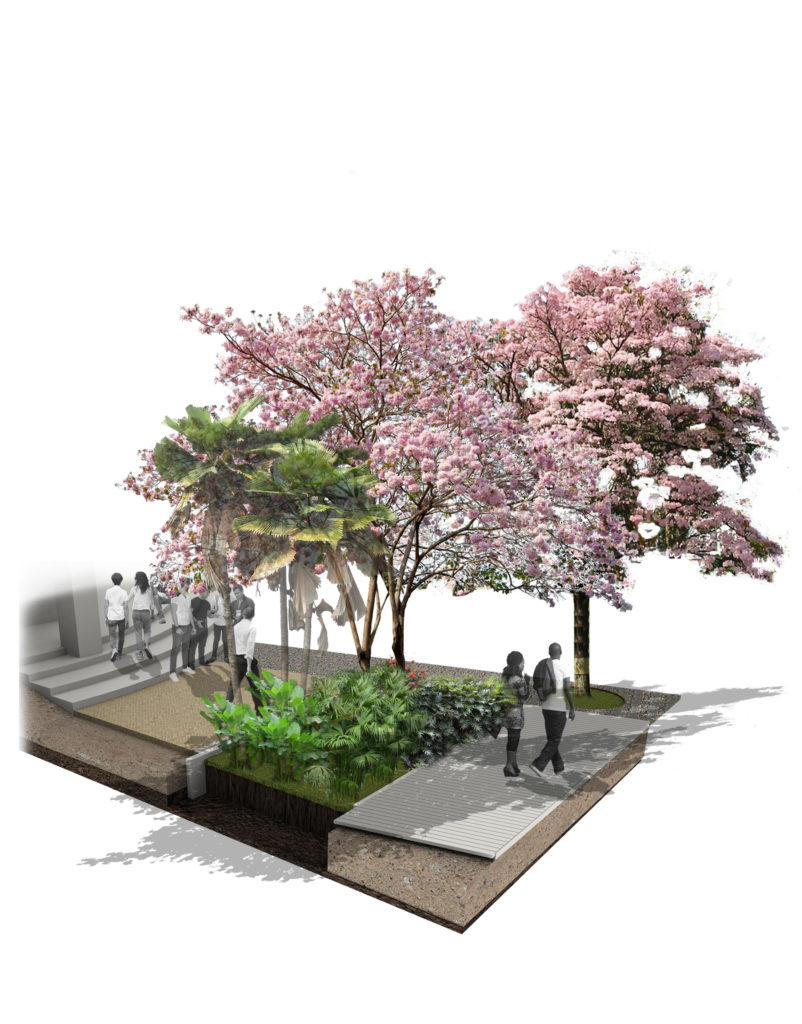 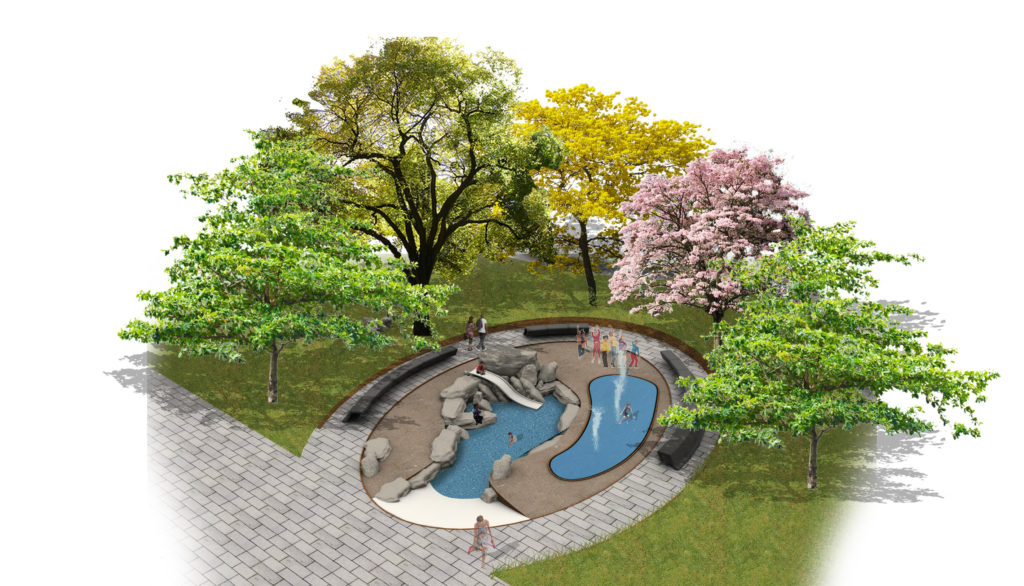 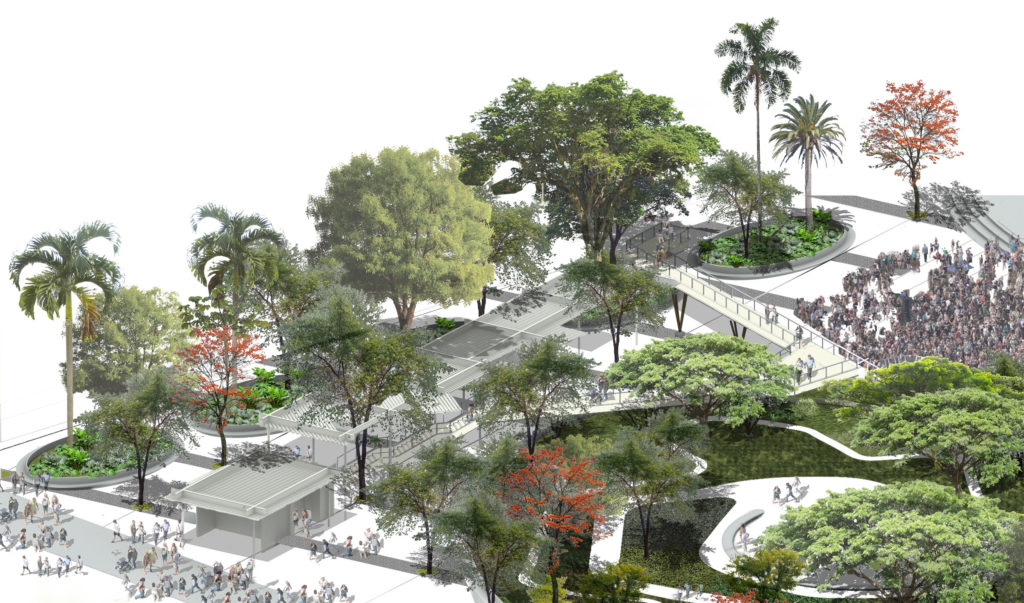 For the revitalization of the center of La Tebaida it is necessary to ask ourselves how a new pedestrianized center would function and what opportunities it offers for the future of the city. La Tebaida will duplicate its population in the near future and it is crucial to envision today an organized, green, healthy, competitive and beautiful city.

An improved accessibility and circulation for the inhabitants and visitors of the center of La Tebaida requires less busy roads around the main public squares (Calle 13, Carrera 5 and Calle 11, Carrera 9 and Calle 10) and the pedestrianization of the streets that serve as the preceding spaces for the main squares of the town: the Carrera 6, responding to the great number of people that gather to visit the church and the town hall, and the Carrera 8, promoting the market square as a catalyst of public life. The traffic circuits are reorganized to improve mobility for both public and private transport. The parking areas are relocated in accordance with the new model of circulation that prioritizes the pedestrian.

La Tebaida has the responsibility to integrate the La Jaramila and La Tulia rivers into its urban fabric, converting them into tourist attractions that boost the city´s competitiveness and at the same time promote sustainability and environmental awareness.

A network of vegetation that emerges from available green spaces, public, both of recreational and contemplative character, sustains a water management system that allows for the city to cope with the weather extremes that climate change will bring about. Moreover, this new green network will create a territory of livable and healthy spaces and improve the quality of life of the inhabitants.

We propose a significant increase of the pedestrian areas in relation to the areas for motorized traffic, passing from 50% today to 90% in the plan. The total area of the Plaza de Bolivar is 10.874 m2. Today 5.060m2 are destined to cars, which will be reduced to only 1.035 m2, leaving 9.839 m2 for pedestrian uses, new activities, events and vegetation. The parking areas are relocated, giving priority to public transport and creating blue zones in the surrounding streets for private cars.

Following the traces of trees, uses, areas of pubic assembly and other activities, we propose two public squares of distinct character, however of equal importance for a city that will soon grow to 40.000 inhabitants: a civic square (Plaza de Bolívar) and a park (Plaza Nueva), more intimate and diversified.

La Tebaida possesses an important asset: it allows for the typical coffee area landscape to be brought right into the heart of the city, without being part of the UNESCO denomination. Streets of mainly pedestrian character, connected to the Jaramilla and Tulia rivers, allow for the consolidation of a natural, pedestrian and tourism friendly network, enclosing La Tebaida in a green ring and converting it into a living territory. This potential implies the rethinking of the ecological trails of the rivers and the further development of connecting public spaces: diverse, well designed and attractive.

A thorough understanding of the road structure of La Tebaida and of the physical structure of built masses and urban voids, reveals a series of urbanistic opportunities for the city that can greatly improve its habitability. The simple gesture of connecting the open spaces by means of green axis, articulated by trees, creates the framework for a friendly and attractive city. This new system of public spaces turns La Tebaida into a new travel destination, built upon the value of its existing urban structure.