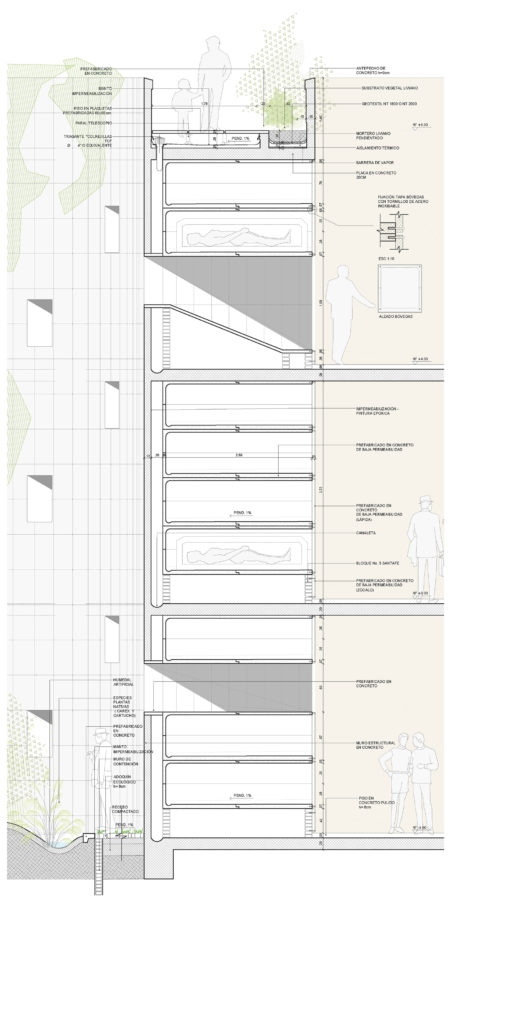 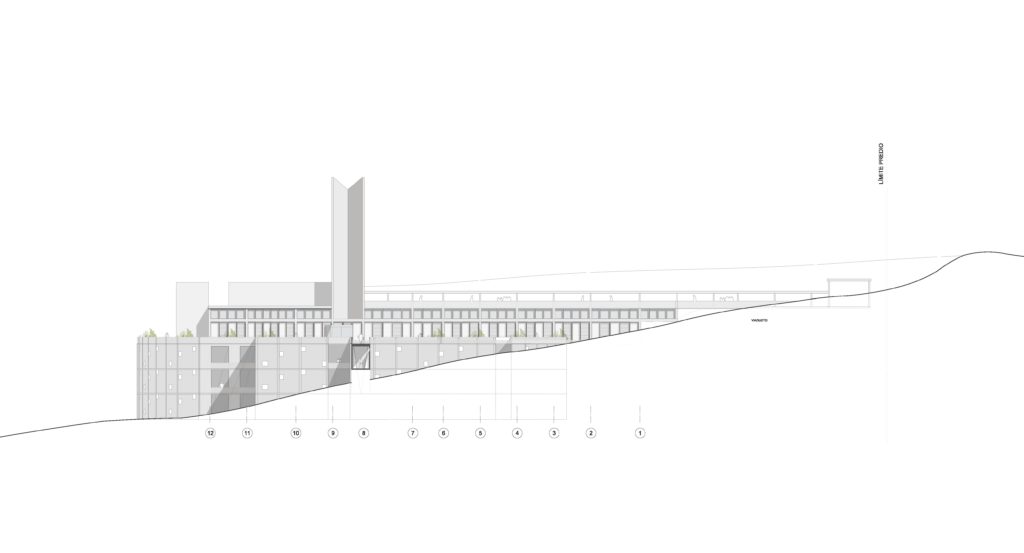 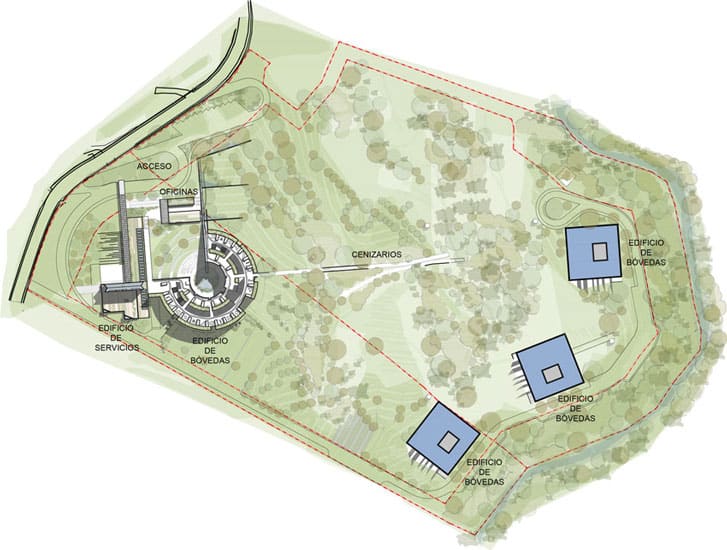 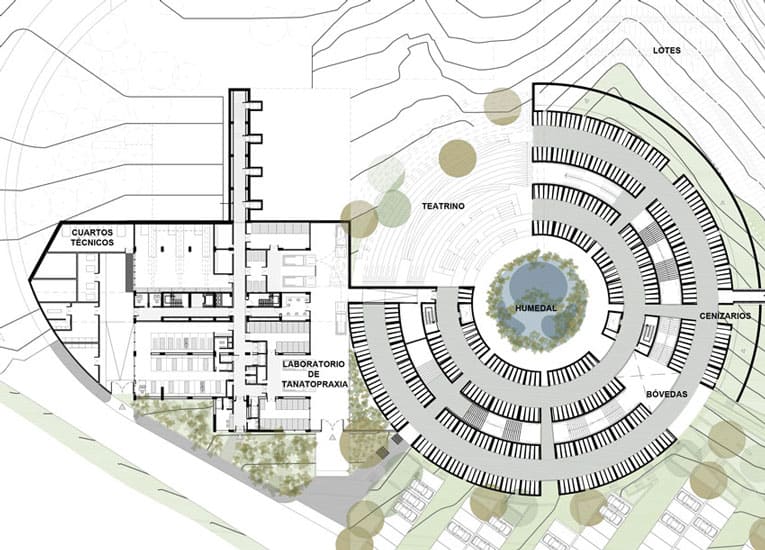 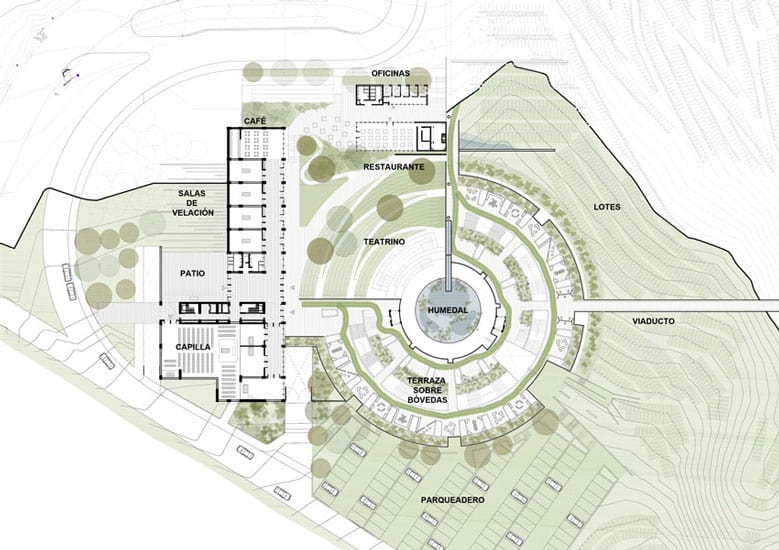 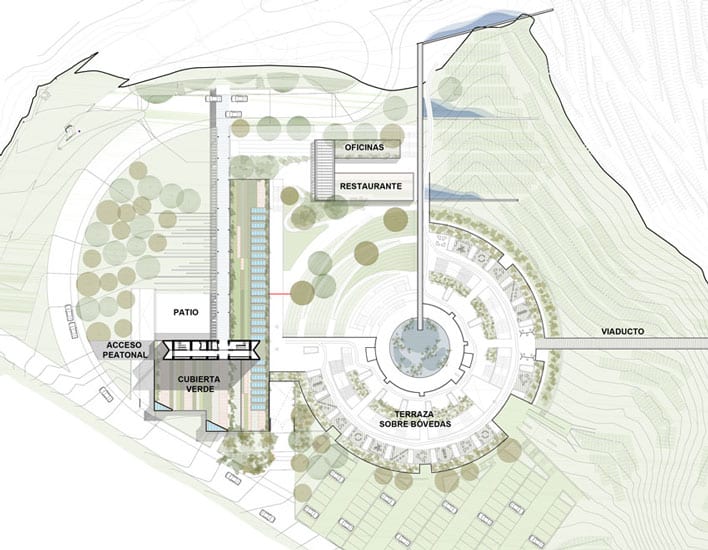 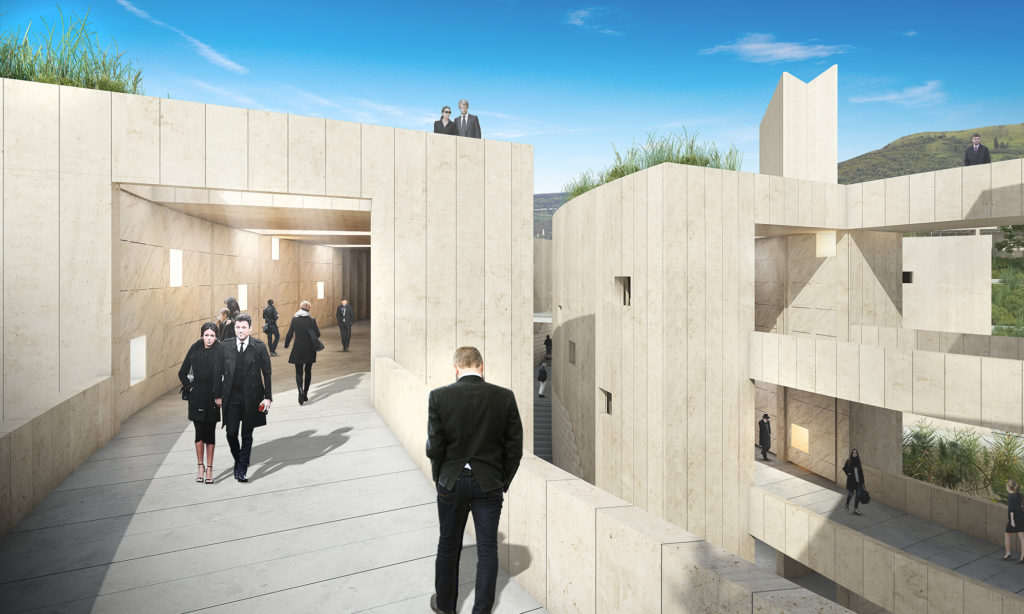 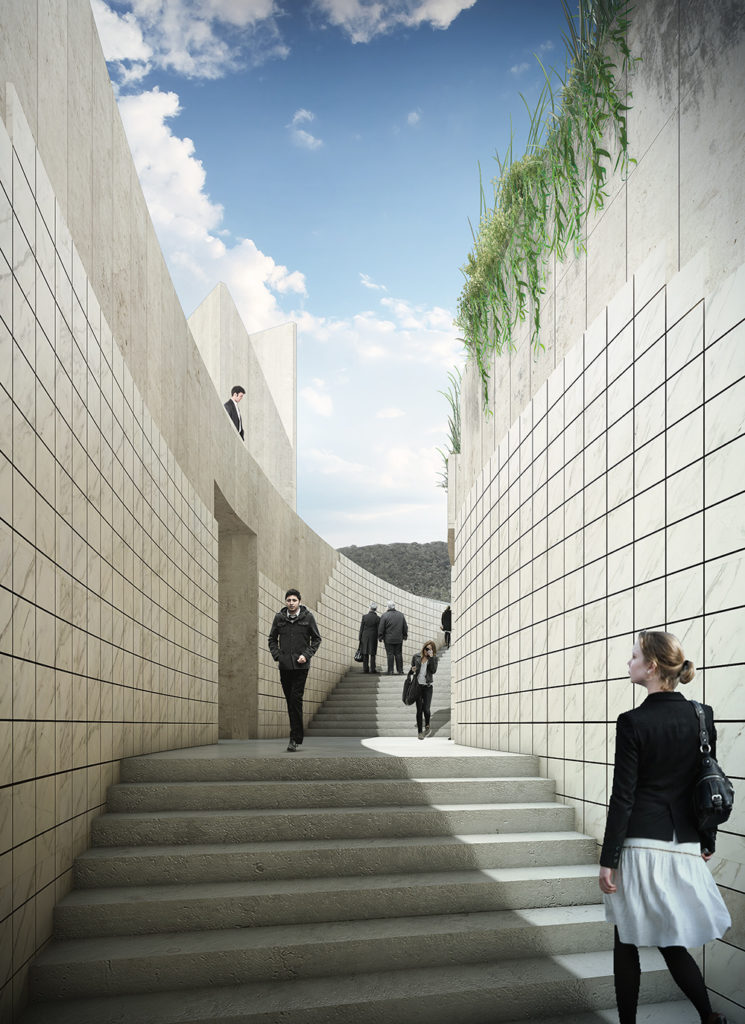 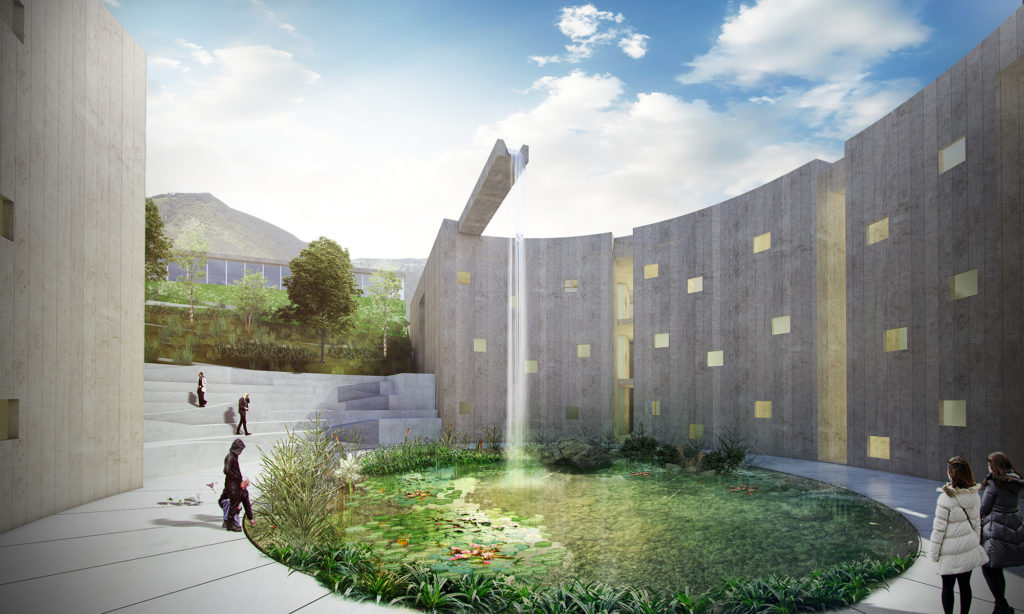 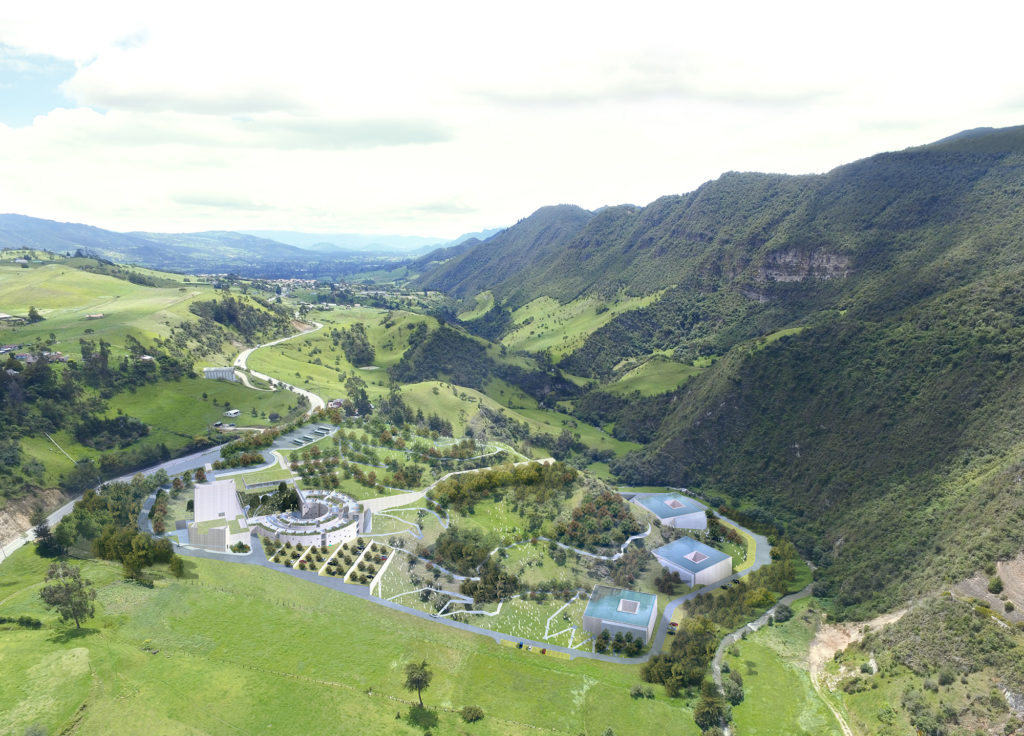 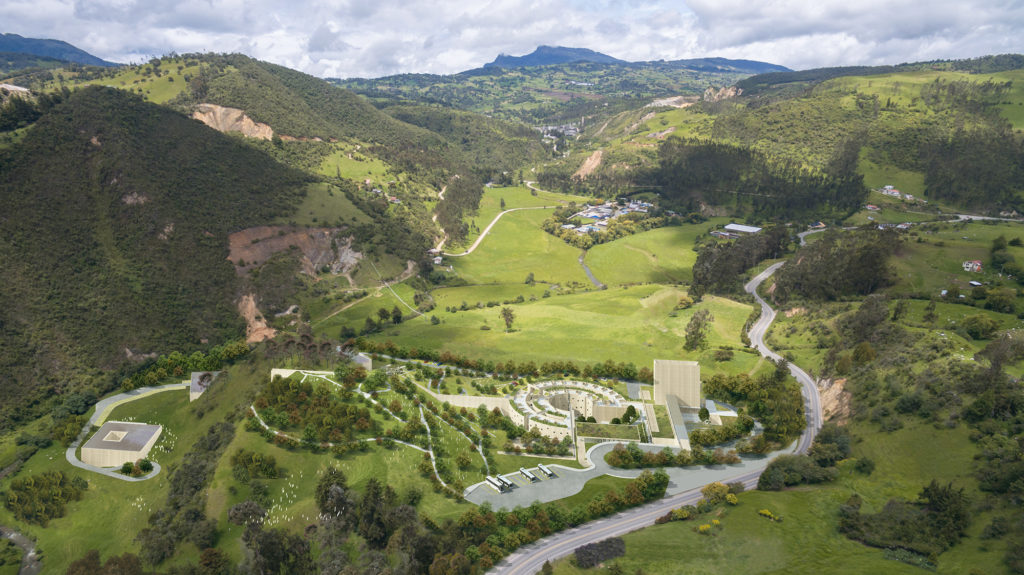 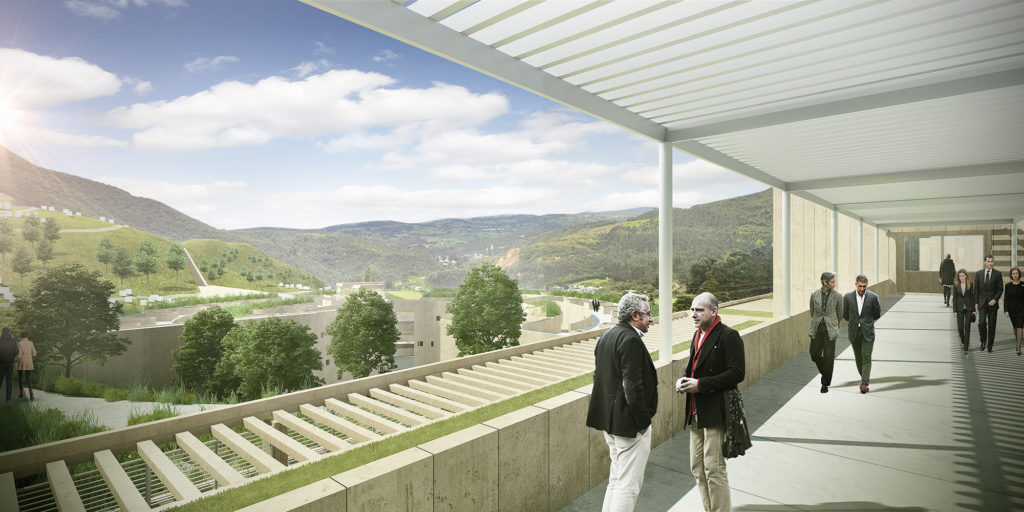 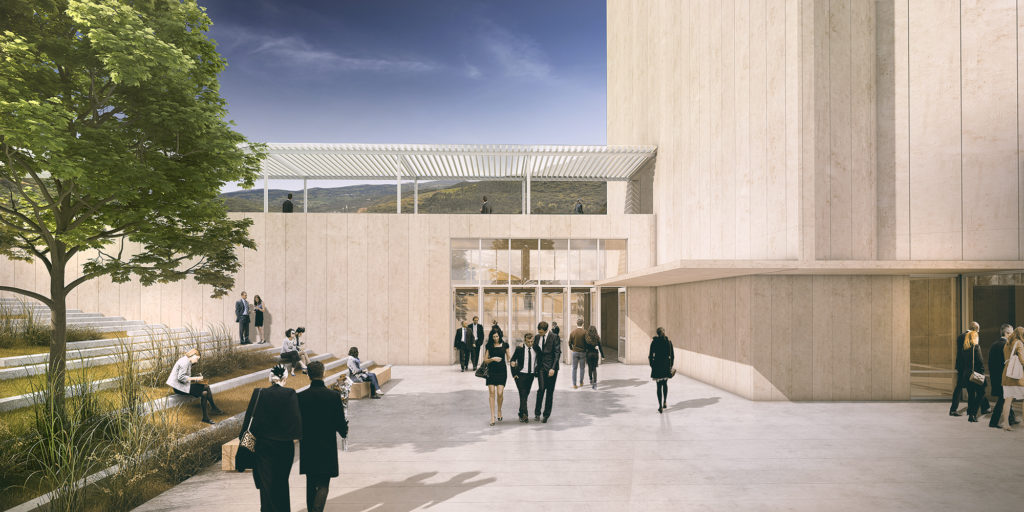 In our present day society, the notion of death and mortality has lost much of its spiritual meaning. Cemeteries have become, in a certain way, places of taboo, functional and predictable. With the design of this project, it is considered that the contemporary cemetery should abandon this sterile idea of death and should transform itself into a place of commemoration of life, continuously attracting visitors; not only family members, but also passersby, tourists, travelers, excursionists and pilgrims.

The project site results to be the perfect place to realize this intention. A steep terrain, in the valley of the river Teusacá, facing an impressive mountain covered with a magnificent forest reserve guarantees the preservation of the landscape that will acquire transcendental importance in the project from to different points of view. Firstly, the views become the defining axis of the design, accompanying the symbolic value of the architecture. Secondly, compact but large buildings are proposed, with a high symbolic value. In the upper part of the terrain, close to the highway and the entrances, the service building is located, where the farewell ceremonies and preceding rituals take place. The chapel, the mourning rooms and farewell rooms are flexible spaces that, by means of a technological system of motorized coffin lifts, are connected to a modern area designed for thanotopraxy, laboratories and retorts, each with its corresponding mechanical systems. Necessary specifications for a funerary complex of the intended scale.

The second part of the architectural project consists of 18.000 vaults, which are grouped in several separated building volumes, corresponding to the different phases of the construction process. They are well-integrated with the site´s topography, assuring monumental spaces of commemoration and scenic walking routes, both inside and on top of the structures. The clustering of the program in these compact volumes, allow for an important part of the site to be used for the restoration of the native forest. Here, the 5.000 burial plots are arranged, connected by pathways of great ecological value.

The project is conceived as the fusion of various monuments into a single complex. A Greek amphitheater that elevates the landscape to a marvelous backcloth, an obelisk that organizes the space and fixes a community landmark, a mausoleum that commemorates life and dignifies death, and a nature park that incites visitors, ecological consciousness and the appreciation of the landscape.