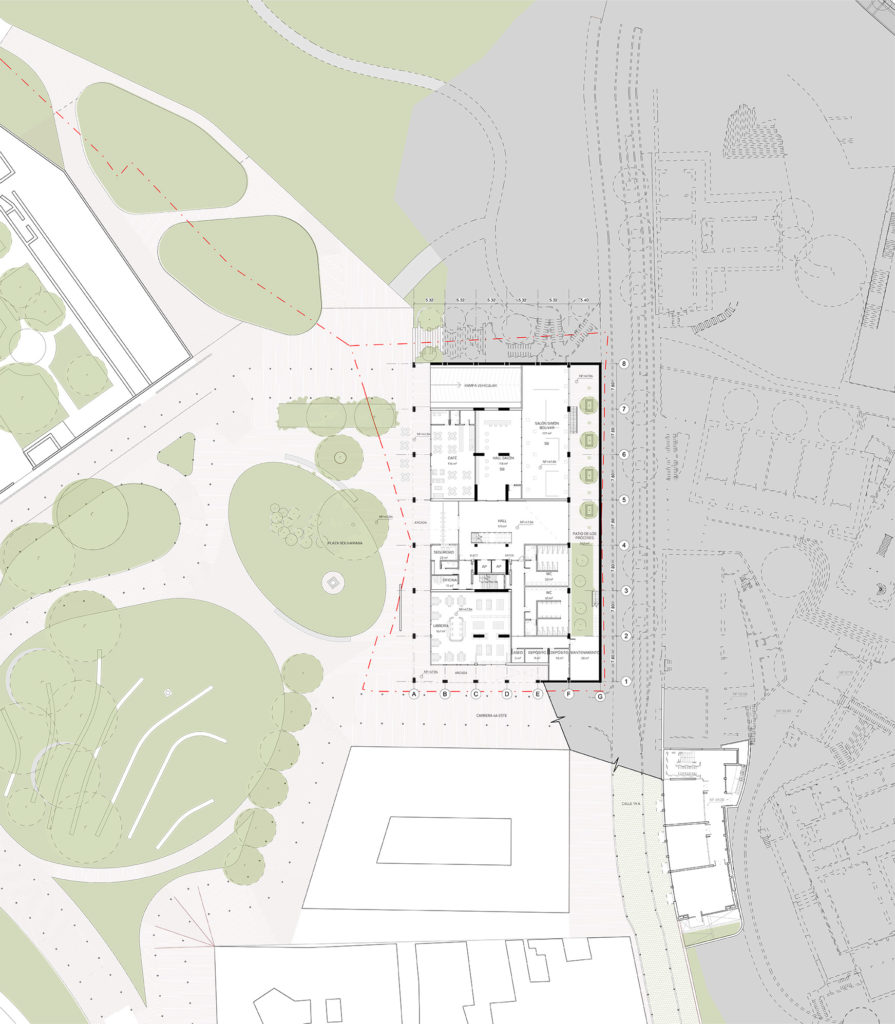 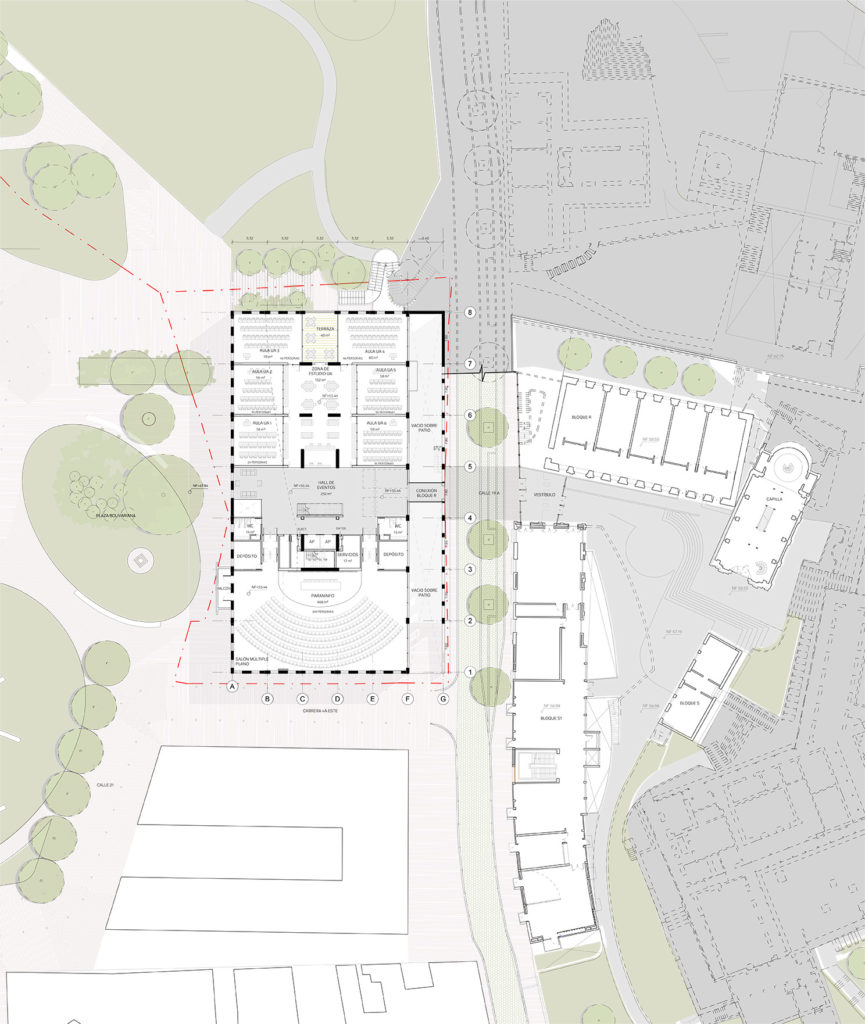 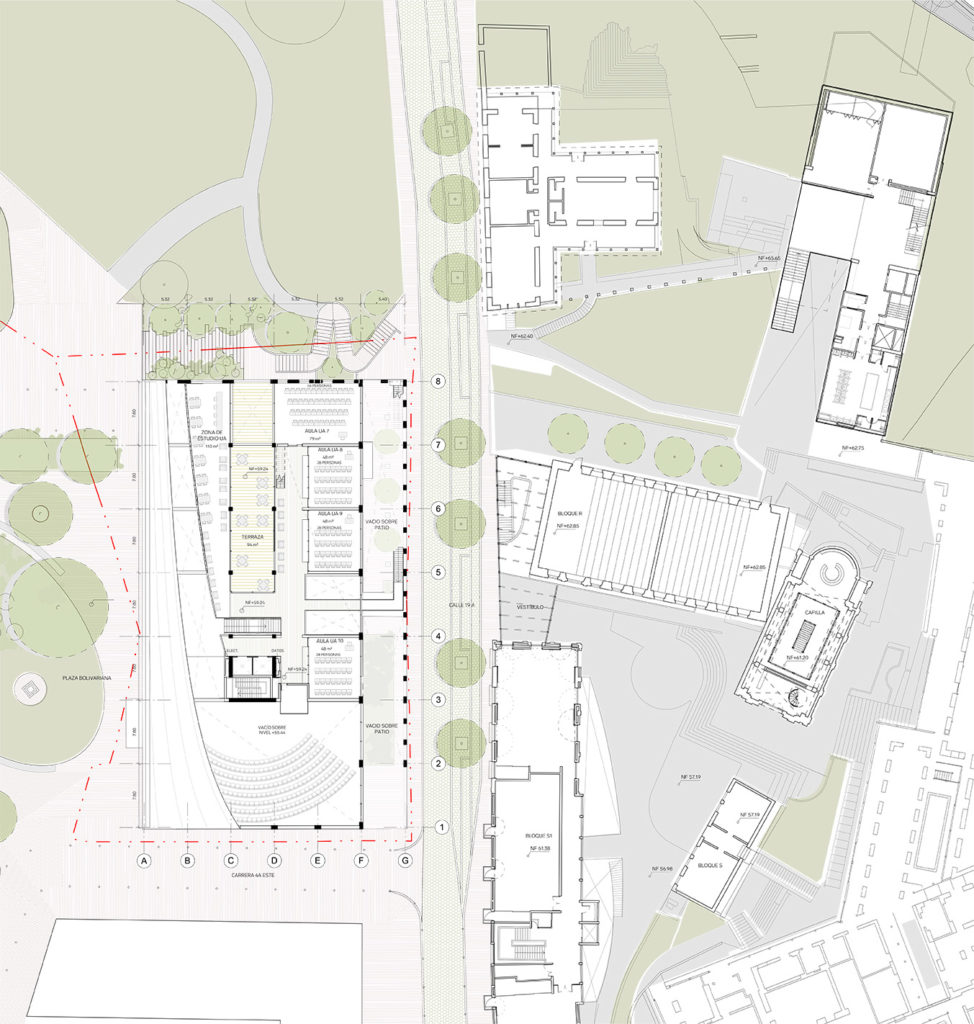 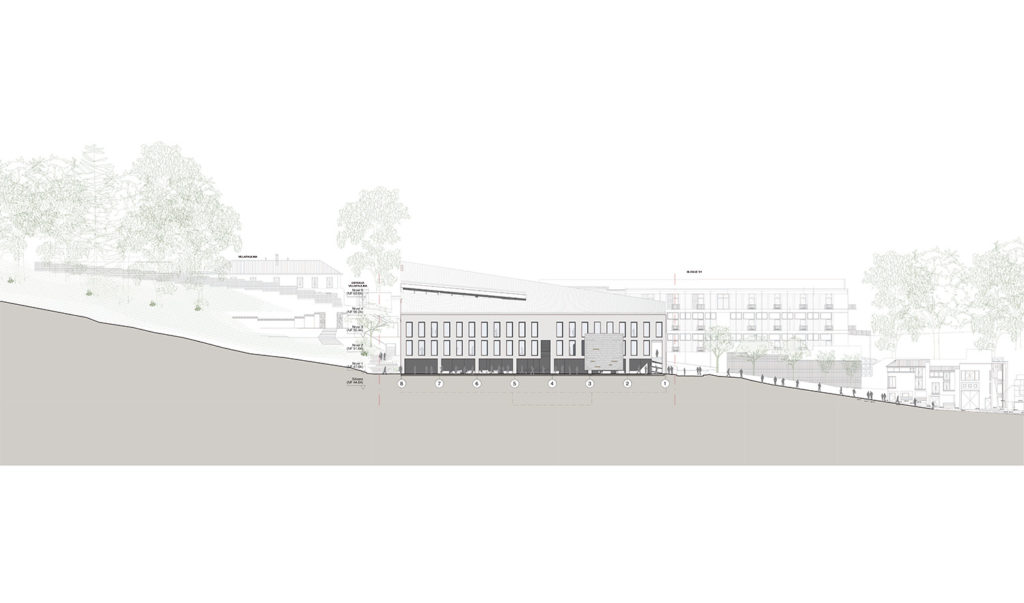 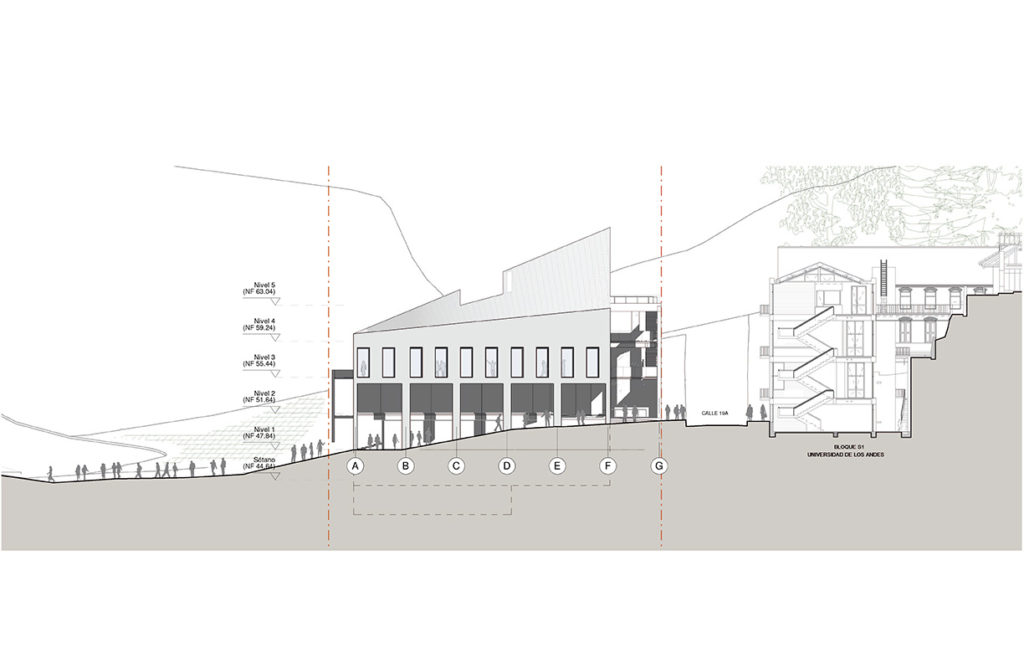 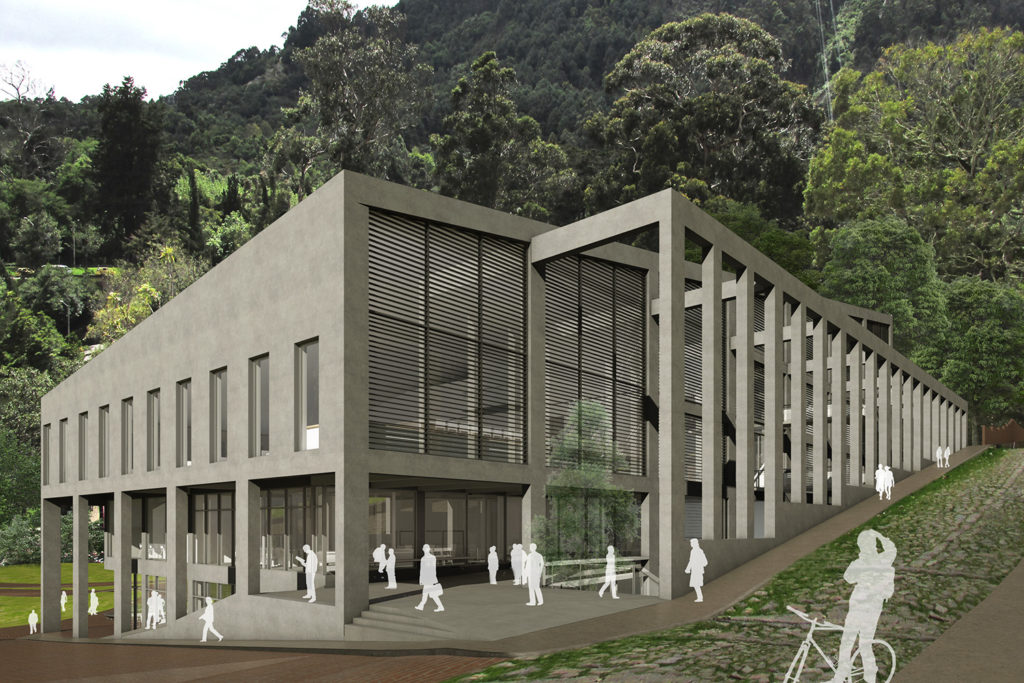 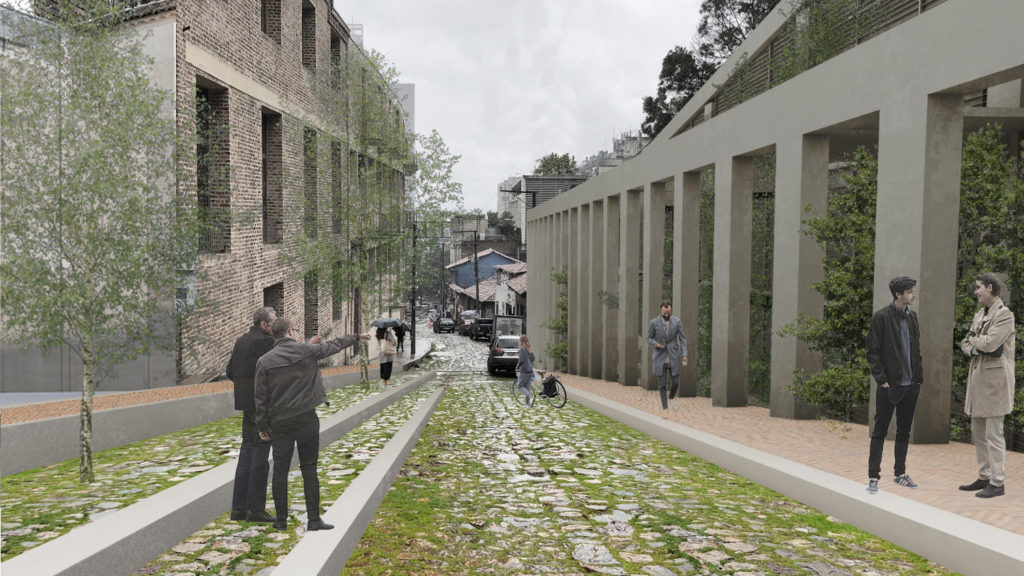 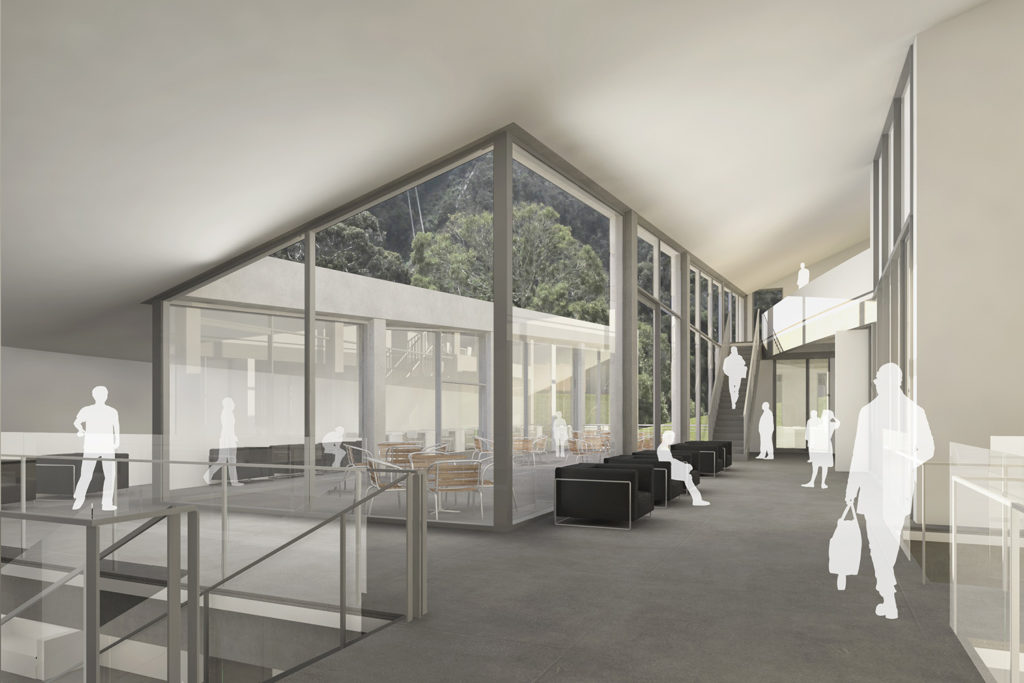 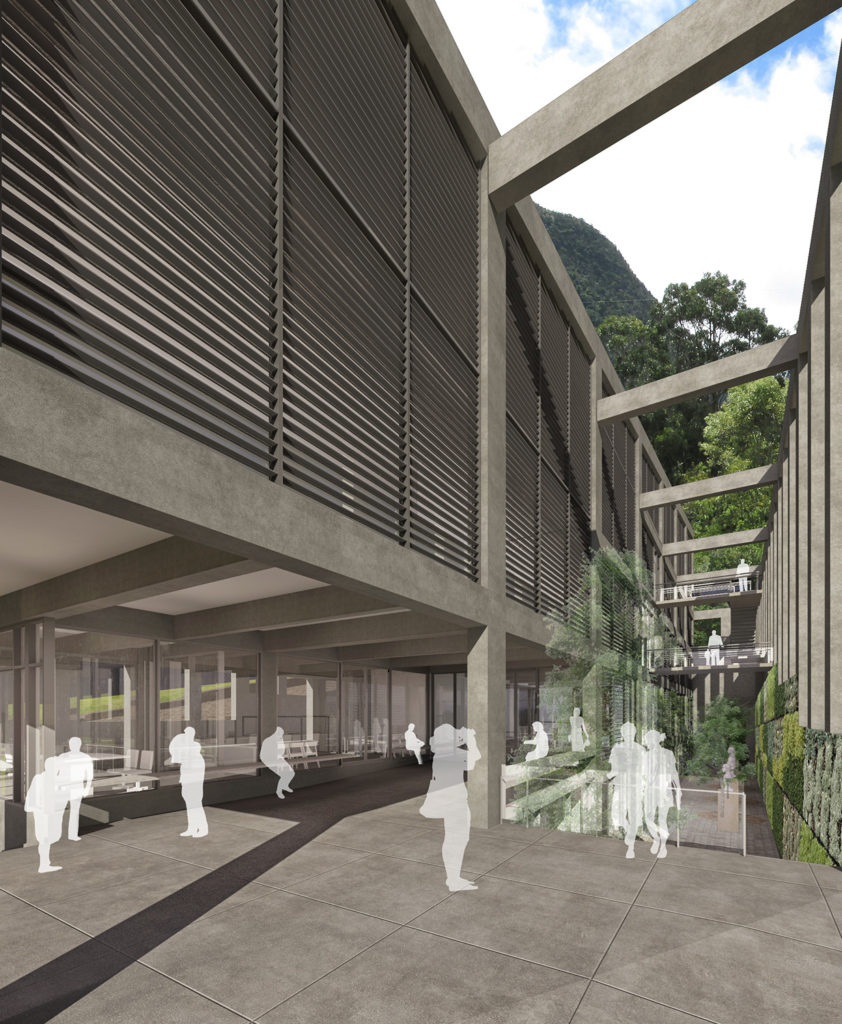 The project proposes the prolongation of the Eje Ambiental, an iconic pedestrian corridor, up to the open river bed of the San Francisco River located at the Plaza de La Gota, in order to conform a continuous urban passageway that is connected, on the one hand, with the ecological trail alongside the river, and on the other, to the iconic cable car station of Monserrate on the Paseo Bolivar. Likewise, it intends to provide a public space of integration that we propose to be named Parque Vicachá, conforming the pedestrian access to the Quinta de Bolívar and replacing the current, mainly vehicular entranceway. This public park will also be the front of the Sociedad Bolivariana, its representative space, and a new access to the campus of the Universidad de Los Andes. It is a fundamental piece in the new relation of the university with the city, intending to open up its campus to the surrounding urban areas.

The access to the campus, the park, will be of great importance as we anticipate it will be used to access the Santo Domingo building, the new buildings to be erected as part of the project Progresa Fenicia, and the Mario Laserna building, thus covering 28 to 30% of the university´s usable floor area. This public space, dedicated to pedestrian use, is the missing link to connect the Eje Ambiental, the San Francisco River and Bogotá´s mayor mountain landscape, the Cerros Orientales.

The basic strategy is not to divide, but to mix. Thus, the two involved institutions complement each other, and share their strengths. In order to realize an integration of the two entities, it is proposed that the back garden is converted into a “Jardín de los Próceres”, a garden of nobles, where the sculptures and busts of the Sociedad Bolivariana are exposed. Similarly, its paintings can be displayed in the circulation areas of the new building.

The image of the Socied Bolivariana is constituted by the inscription of Simón Bolivar´s life periplus in an 8 x 8 meter slab, listing all of the places visited by the Libertador during his life. A stencil type letter text, with capitals of 18cm height that perforate the slab, produces a fretwork that allows for the light to pass and cast a refined shadow pattern on the building´s façade. The public space of the Quinta de Bolivar will also be the space of the Sociedad Bolivariana.

The building strictly follows the urban regulations, never surpassing the maximum allowed height of 11.40 +1.50 m above street level. As a consequence, the roof of the building is a double curved surface conforming an unusual geometry that gives the building a particular aspect.

In order to obtain optimal conditions of lighting, ventilation and indoor temperature (avoiding the humidity of the soil), the project introduces a backyard patio of 6 meters wide, which is at once a sculpture garden of the Sociedad Bolivariana and a space that gives special importance to the second floor entrance from the lower pedestrian street. Towards this patio classrooms, lobbies, restrooms and offices open up to obtain natural lighting, visual relief and ventilation.

To obtain flexibility and a wide range of classrooms types with different sizes and layouts, a 5.80 x 11.60 m grid structures the plan to accommodate rooms for 25 to 100 students in all possible configurations. A free plan building with a central vertical circulation core offers maximum flexibility and efficiency of spaces and at the same time a unified, undivided image.